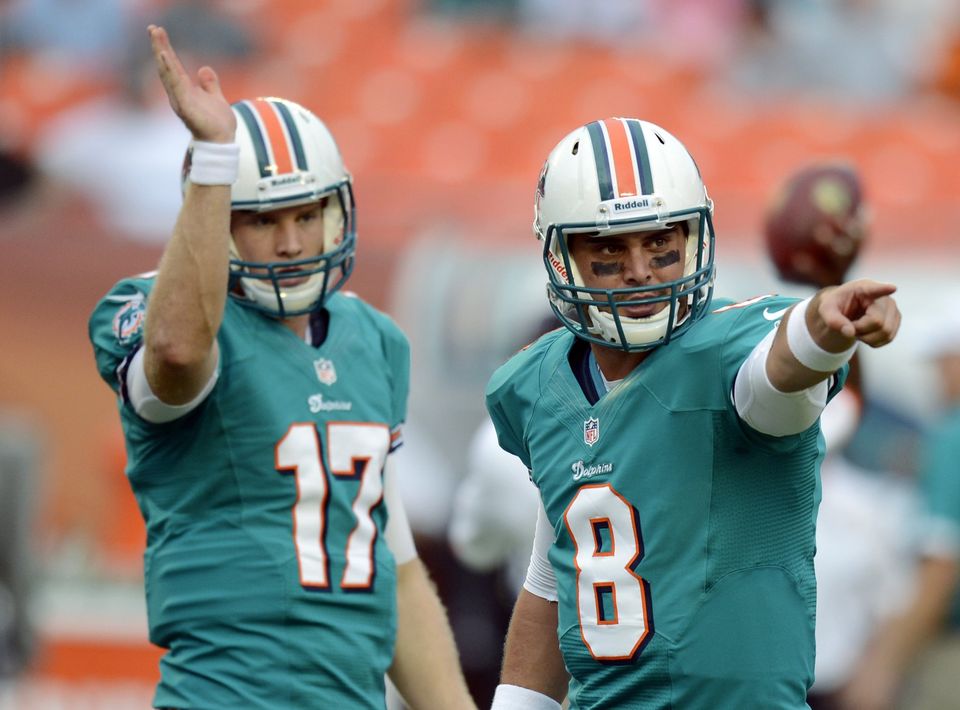 The Dolphins QB question starts to simmer at the end of his third season, do you pick up the 5th year option this offseason, or do the Dolphins have him prove a bit more before they commit to another year. A possible regime change has this question firmly in the air, but just based on performance where do we sit.

Tannehill's Troubling Trends, you might think I'd start this off with the deep ball problems but I'm not, there is a more troubling trend I've become more aware of lately. Tannehill has had his "crunch time critics", I've been among them, but recent play by Tannehill prompted me to look closer.

Going back five games, Tannehill has missed on 4 "can't miss" TD throws, all inside the 11 yard line, all to open recievers, two in the Detroit game, both to Clay, one in the Jet game to Gibson and one in the Raven's game to Wallace.

In Detroit, on two consecutive plays Tannehill missed easy TDs to Clay inside the 4 yard line. The first play was a short pass into the left flat from the 4 yard line, Clay was about 5 yards away from Tanne and just needed the ball in front of him to score a TD, but the pass is thrown behind and down on Clays back left hip. Clay manages to catch the ball but in doing so fell down, having to spin completely backwards to have to make the catch, gain of two.

On the next play, from the two yard line, Clay gets open under the goal posts, about ten yards away and right in front of Tannehill, Tannehill puts the ball low and behind again, this time to the right hip, Clay gets his hands on the ball but a defender knocks it away.

In NY, nearly identicle play to the second Clay throw from Detroit, from the four yard line, Gibson gets open going under the goal posts, Tannehill is high and to the right, Gibson can't get his hands on the ball. Only twelve or so yards seperated Tannehill and Gibson who was clearly open, It made me wonder how you miss that bad from that range.

Against Baltimore, From the eleven yard line, Wallace gets about two yards of seperation going into the endzone, wide open, Tannehill throws wide right, would it have been nice to see Wallace sell out for that pass, yes, does that change the fact that Tannehil missed on an easy pass, no.

The really troubling thing all four of these passes has in common, they were all in crucial situations in the forth quater. Crunch time, just the time when you need him to play his best, and he's leaving gimmy TDs on the field. At Detroit it was a tie game, we had to settle for a FG, at NY we were down by a TD, Miller scored on the next play, and against Baltimore we were down by four points, we could have taken a 17-14 lead in the fourth quater, but were still behind after settling for a FG.

To be clear on this subject, these are not the type of passes that signify that your a franchise QB, not at all, these are automatic for a franchise QB, must make throws for any QB. In the case of both Clay throws and the Gibson throw, there was no defenders between QB and receiver, no one to throw over or around at point blank range, all 3 inside the four yard line. Wallace was wide open, he created a ton of seperation in a short space, there was a lot of area where that ball could have been completed,  but Tannehill missed, from the eleven yard line There was a stat posted in the Jet game, Tannehill has a 98 QB rating in the first 3 quaters and a 75 QB rating in the fourth, that sent me looking into Tannehill's splits.

These stats are painting a picture of a QB who is not getting it done in crucial situations in particular, take out third downs, fourth quaters and trailing in games and Tannehill has good stats, but you can't do that. He is showing a pattern, a tendency to underperform in crucial situations, like the four passes in the last five weeks.

Then you also have the deep ball issues and the pockect awareness issues as well, but the underperforming in crucial situations is much more important, a QB that is not helping you win those close games isn't going to last. So in the end will Tannehill be just a better version of Henne, a talented QB you have to move on from, because they just aren't it.

Tannehill will have to start playing much better in crucial situations if he wants to make his mark in the NFL, a good start would be a win in NE.