NFL Draft will be big for Mike Tannenbaum and Chris Grier

We are now less than a month away from the 2016 NFL Draft, and the draft for the Miami Dolphins is shaping up into a BIG component for the Dolphins to add needed talent on this roster to fill holes.

So far, Free Agency has been a mixed bag for the Dolphins.  I like the trade bringing in CB Byron Maxwell and LB Kiki Alonso to Miami, as you bring in young talent to positions of need for the Dolphins.  Both players are coming off of down years for them, Maxwell due to playing in a system that is not a good fit for him, and Alonso due to injuries.  I believe both can have bounce back years for Miami, and that will be a key part of any success the Dolphins defense will have in 2016.  Acquiring DE Mario Williams and OG/OT Jermon Bushrod were good signing for the Dolphins, although in the case of Bushrod, he is being bought in to compete at OG, a position he has not played before.  Detroit S Isa Abdul-Quddus is seen as a player with talent, a player on the rise and Isa played well for the Lions in 2016.  OG Kraig Urbik is a player with starting NFL experience, starting 57 of his 84 games in the NFL.  He brings much needed quality depth to the offensive line for Miami at a position that has given them trouble.

That said, the Dolphins missed out on the one player that really could have helped solidify the offensive line when they missed out on OG Alex Boone.  Also, the Dolphins, willing to let RB Lamar Miller walk, missed out on getting C.J Anderson from the Broncos, as Denver ended up matching the offer the Dolphins put together for C.J.  Then the missed on on Arizonz RB Chris Johnson, who signed back with the Cardinals.  Miami recently singed RB Isiah Pead and former Dolphin RB Daniel Thomas, but they are no more than bodies and perhaps players that can challenge 3rd string RB Damien Williams.  Miami also signed OT Sam Young from Jacksonville and recently re-signed Ulrick John, players who will be fighting for roster spots and provide depth at OT for Miami.  Miami had RB Arian Foster, coming off a torn Achilles against the Dolphins in for a visit.  It was known that Foster was not looking to sign a contract and will not sign until after the draft.  Miami wanted to take a look at Arian to see where he is physically, and in my opinion, if healthy, Arian could do well in Miami's system and be a nice complement to RB Jay Ajayi.  BUT, that still leaves Miami looking to draft a RB in the draft now.

That brings us to the upcoming draft and Tannenbaum and Grier.  The pressure on these two men will be IMMENSE.  They will need to come out ouf this draft with both quantity of talent as well as quality.  Miami will need to come out with at least 3-5 starters/contributors to the 2016 team.  The Dolphins have seemed to want to build thru the draft and not thru free agency in regards to starters, and NOW they will have to come thru with how that do in the upcoming draft.  A good portion of free agency has been about adding talent to the back end of the roster, with the obvious exception of Maxwell, Alonso, Bushrod, Williams & Quddus.  This week, CB Greg Toler came in for a visit, but left withouth signing a contract.  Miami did sign TE MarQueis Gray.

Miami will not look at add any free agents of consequence until after the NFL Draft, as it would jeopardize the compensatory picks that the Dolphins will have going into the 2017 Draft.  As of right now, the Dolphins have 2 compensatory picks, a 3rd and a 5th for losing DE Oliveir Vernon and RB Lamar Miller.  I had said 3 a few weeks ago, but that was a mistake.

Going into the draft, the Dolphins will be looking to draft CB, LB, DE, OG, DT.  There has also been a lot of talk of the Dolphins taking a developmental QB in this draft as well, so keep an eye on that.  The Dolphins will be working out Michigan QB Jake Rudock here in the near future and have a private 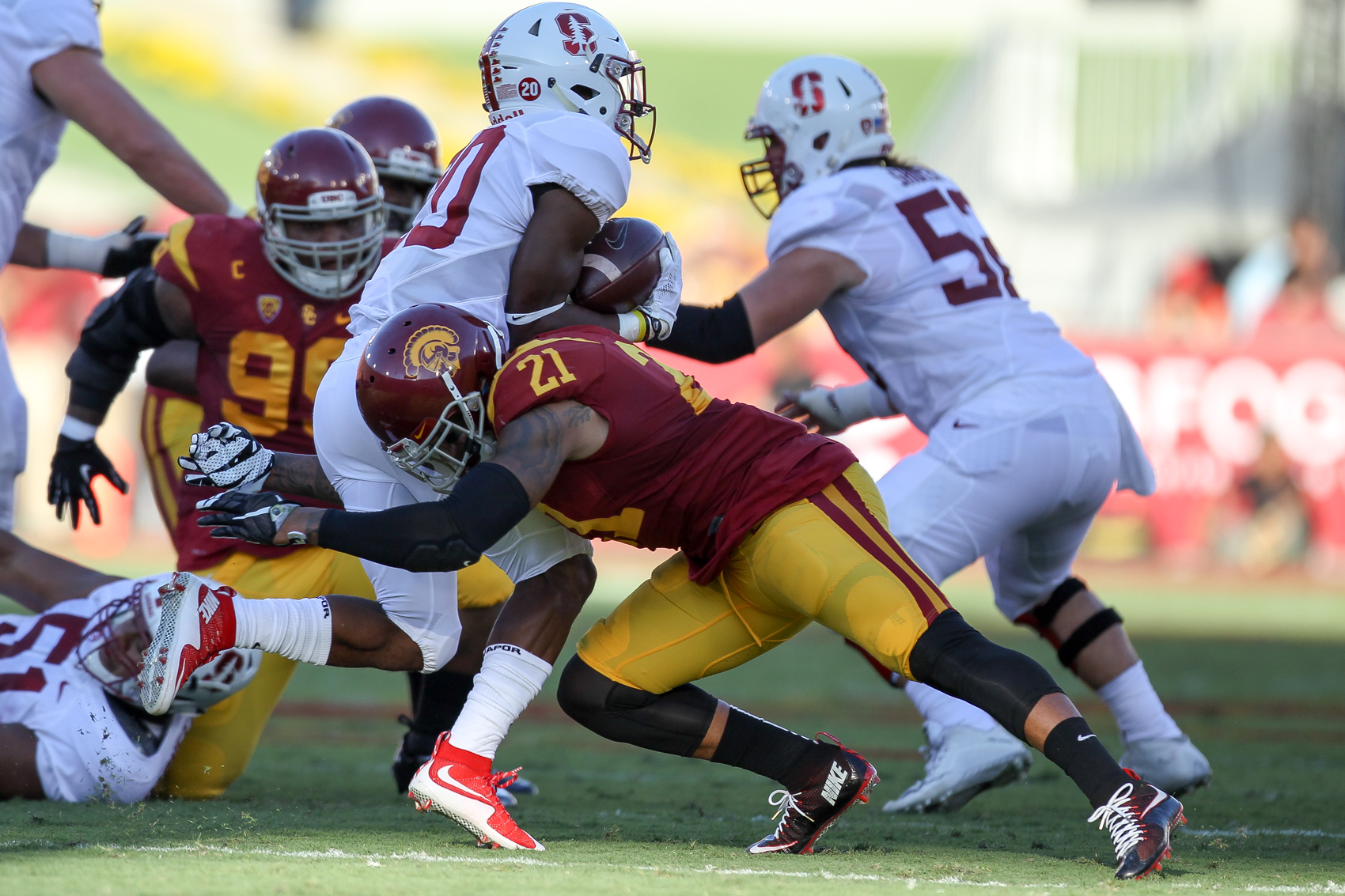 A player to keep an eye on is OLB Su'a Cravens of Southern Cal.  The Dolphins meet with Cravens at the Combine and Barry Jackson of the Miami Herald had an article stating that the Dolphins are bringing Cravens in for a visit to the Davie Complex as well.  It is no secret that the Dolphins need to improve the linebacker group, and Cravens could be a player the Dolphins look to bring in.  Here is a write up on Cravens from NFL.Com.

Cravens' extended family has several NFL ties, including cousin Jordan Cameron (former USC and current Miami Dolphins tight end), distant cousin Manti Te'o (Notre Dame/San Diego Chargers linebacker) and his mother's second cousin David Fulcher (former Arizona State and Cincinnati Bengals safety). While those genes portend great athleticism, Cravens made his own name as the USA Today National High School Defensive Player of the Year in 2012 (97 tackles, eight sacks, three INT). He graduated from Vista Murrieta High a semester early to join USC for 2013, securing a starting spot at strong safety the following fall despite injuring his knee in the spring. Cravens made various Freshman All-American teams as well as honorable mention All-Pac-12 notice (52 tackles, four interceptions). He moved to a safety/linebacker hybrid role as a sophomore (a change he strongly resisted at first), leading the team with 17 tackles for loss (five sacks) and three interceptions to earn third team AP All-American and first-team All-Pac-12 accolades. Cravens repeated those honors in 2015, topping all Trojan defenders with 86 tackles, 15 for loss, and 5.5 sacks and once again showing his overall game by intercepting two passes and breaking up two others.

Born to be a football player. Combines smarts, instincts and toughness. Will not hesitate to jump into the mix and have proven his ability to make full­-time conversion to linebacker. Outstanding with his hands. Always first with his punch into blocker's frame and unlocks instant arm extension to keep himself clean. Showed ability to engage blocker, shuffle with square pads and disengage for the tackle. Scouts believe he will comfortably carry over 230 pounds in pros. Big boy production comes from always choosing play-making option over passive route. Loves to play on the other side of the line when possible. Sticky hands and can take the ball away if you give him a shot. Posted nine interceptions in three years. Aware in zone coverage, but has some blitz value. Will have immediate impact on special teams coverage.

Small for an NFL linebacker spot. Lack of length to consistently pull himself around the corner against edge blocks. Former safety who is still learning nuances of the position. Will take time to adjust to NFL power at the point of attack. Will get hooked inside and lose contain. Not as twitched up and fast as expected. Will get engulfed if he doesn't win early with hands. Unable to maintain feel for the target in his trail technique in man coverage. More likely to maul and grab over trusting technique in coverage. Willing to dive and miss rather than working for a higher percentage tackle.

"He's a lot of fun to watch because he processes quickly like an NFL linebacker and then just fires into the play. I've never really cared about the size at the WILL, I just want to know if they have instincts and can run and make plays. That's it. He can do that." -- Former NFL general manager

Plays with a unique lens that includes his time at the safety position as a freshman. Teams focusing on putting a "tweener" label on him could be making a huge mistake considering his competitive nature and toughness. Cravens was highly disruptive and productive in each of his three seasons as a starter thanks to his tools/traits to act on his instincts. Cravens will help on special teams immediately and could become an early starter for a 4-­3 defense looking for a playmaking weak­-side linebacker.

Mike Tannenbaum and Chris Grier, it getting closer and closer to showtime and the 2016 NFL Draft.  Are you ready?  Hope you are, because this is going to be BIG for both of you gentleman in regards to the present and future success of the Miami Dolphins.