Thoughts on Miami, Free Agency and the Draft

We are now a couple of days away from the NFL Combine, which is Feb 23-29, and we also are inching closer and closer to the beginning of the Free Agency period for the NFL as well, which begins March 9th.

During the last few weeks I have read a lot of post and comments from Twitter, the Miami Herald, ESPN among other sites in regards to what Miami will look to do in Free Agency and the Draft.  I also have my own thoughts on what the Dolphins may do in Free Agency, and one thing I believe the Dolphins will be is AGGRESSIVE.

So far the Dolphins have released CB Brice McCain and DE/DT Quinton Coples, and that is just the beginning of what Miami will do in regards to creating salary cap space.  It has been reported by Armando Salguero of the Miami Herald that the Dolphins will use a clause in Ndamankong Suh's contract which allows to the team to re-work his contract for salary cap relief.  Doing this will create over 18 million dollars in salary cap space for Miami, and the goal is to hopefully be able to help re-sign their own free agents in DE Olivier Vernon and RB Lamar Miller.  The Dolphins have said that they want to bring both back to Miami, although they have not talked numbers with either player yet.

While the combine is big for college prospects that want to show what they can do in this part of the process, it is also a time when many teams will meet with agents about their clients in regards to possible contracts and numbers, and this is where things will start to pickup in regards to the futures of Vernon and Miller with the Dolphins.  The thought is if the Dolphins cannot work out a contract with Vernon, they will use the franchise tag on him.  Simon Clancy is the Deputy Editor for BBC Radio and is a contributing editor for the New York Times & Sun Sentinel among other publications.  He has a real vibe on all that is Miami, and I tweeted him to ask him his thoughts on Vernon and Miller and if they will both be back in Miami, and he believes the Dolphins will keep both in Miami.

Vernon is looking for a contract paying him 14-15 million/per year, and the Franchise Tag number is 15 million.  Now, do I think Vernon is worth that type of money, NO.  But in a league starved for pass rushers, the Dolphins have a 25 year old player that has not reached his prime, and has been a very solid player.  Vernon has 29 sacks in his 4 years in the league and has gotten better against the run every year.  And while he is capable of commiting just some unforgivable penalties, he is a player the Dolphins cannot let get away.  He is one of there own, a drafted player that has developed into a good player, with the potential to become an ELITE player.  Miller is also not reached his prime, and for a RB that has been in the league for 4 years also, he still has a lot of tread on the tires.  Miller wants to be a featured back, a back that get's 20 carries per game, and he close to that now as he get's 15 carries per game.  New Head Coach Adam Gase is someoen Miller likes, and I believe Coach Gase will get him the ball.  Miller is that rare RB that has homerun speed, can catch the ball out of the backfield and has gotten better in pass protection.  It's not known what Miller is looking for, but I would think it would be north of 5 million/per year.  Lamar was drafted by Miami as well, and I want to see Miller remain a Dolphin.  Rookie RB Jay Ajayi is a talented kid, but he is not the homerun threat that Miller is.  I think together, these two guys give Miami a formidable duo.

As we approach Free Agency, it has been stated that Miami will look to address CB, LB and OG, positions that the Dolphins desperately need to upgrade going into the 2016 season.  At the OG spot, Barry Jackson reported a few weeks ago that the Dolphins had interest in Baltimore Ravens OG Kelechi Osemele, the 26 year old road grader.  Osemele wants to possible be paid like an OT, as he played a few games for the Ravens at OLT.  The Ravens could possibly release OLT Eugene Monroe if they think Osemele is a viable option.  If not Osemele, look for Alex Boone from San Francisco to be a 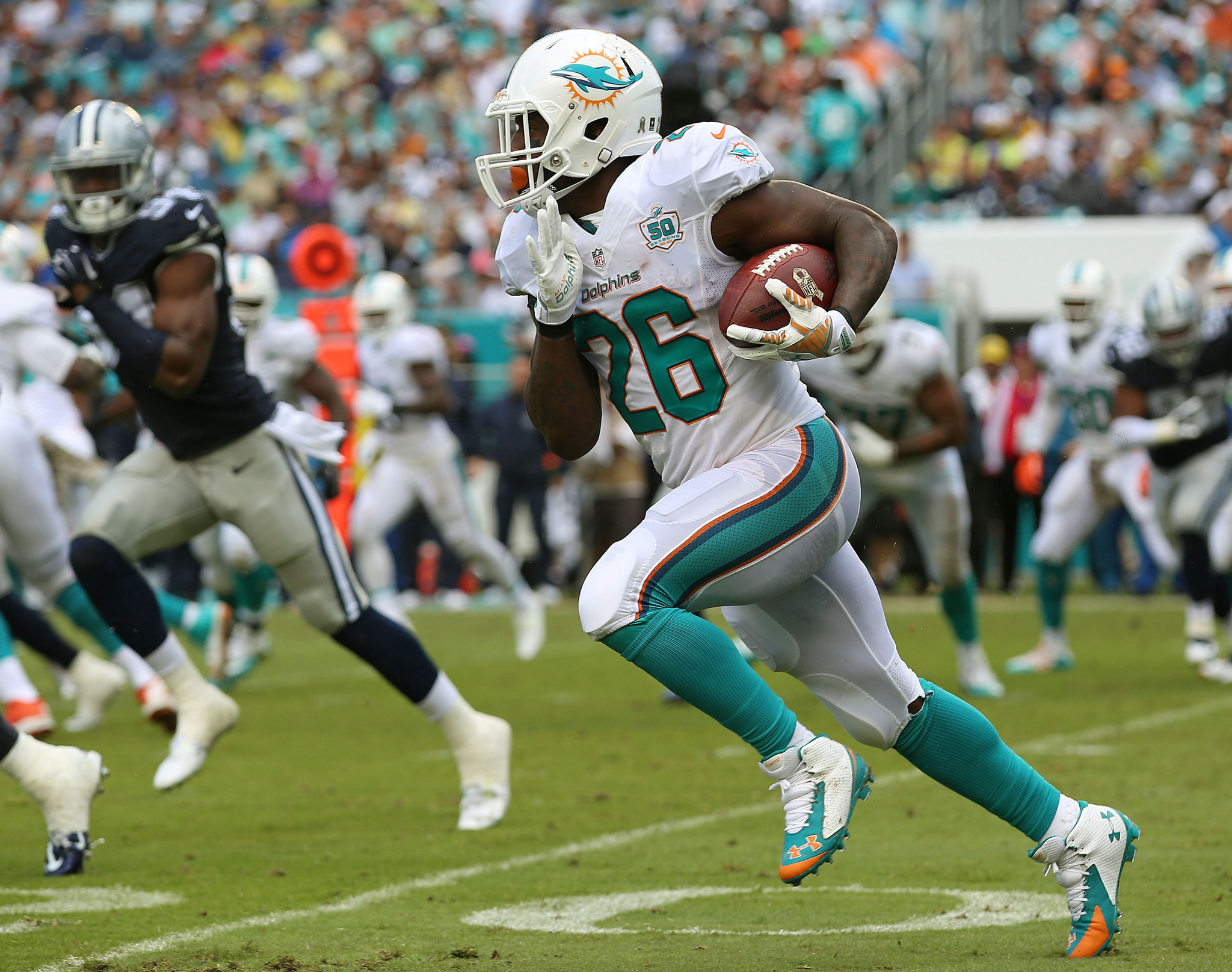 prime candidate, as he played under new OL Coach Chris Foerster while in San Francisco.  The 49ers will meet with Boone people at the Combine, but the thought is they will not be able to get anything worked out.  At the ORG spot, and this is just my preference, I would like to see the Dolphins go after ORG Brandon Brooks of Houston.  I liked Brooks coming out of Miami, OH a few years ago, and he is a big, physical OG that can pull and moves well for a man his size.  He is also only 26 years old, so he is a kid you can count on for a long period of time from an age standpoint.  He will be in demand.

At the CB position, the now Los Angeles Rams have two of the most highly thought of cornerbacks in Trumaine Johnson and Janoris Jenkins, and the thoughts were the Dolphins had interest in Johnson.  It may be much harder to get one of those CB now, as the Rams cleared over 24 million in cap space by releasing DE Chris Long, ILB James Laurinaitis and TE Jared Cook.  I believe this was to help the Rams keep both CB, and because the Rams felt they had in house replacement for those 3 players.  Laurinatis did not have a very good year, ranking next to last among ILB according the PFF rankings, but he is 29 years old, and perhaps a change of scenery would be good for him.  Could Miami have interest, time will tell.  Getting back to the CB though, I believe Miami will have interest in a couple of Cincinatti Bengals, CB Leon Hall and CB Adam Jones.  Both are in their 30's, but both are familar with new DC Vance Joseph, as he was the DB coach for the Bengals last year.  Another name to possibly keep an eye on is Green Bay CB Casey Hayward.  The Dolphins are reportedly looking to sign two CB in free agency, which brings us to Miami CB Brent Grimes.  The Dolphins have a tough decision to make on Grimes, as his play slide considerably from his 2014 season.  He also has a high cap number and a wife that has caused many issues for the Dolphins inside the locker room.  Grimes has said that he has spoken with his wife about the constant criticism of QB Ryan Tannehill and the team, but she continues to be critical.  Joseph wants to keep Grimes, so Miami has a tough decision to make.  They will not keep him at his present salary cap number, so this could be a decision made for them by Grimes if he does not agree to restructure his contract.  One quick note at the safety position, Barry Jackson of the Miami Herald reported that David Burton, the free agent safety from Denver told the Denver Post that Miami is one of the teams expressing intrest in him.

Switching to the linebacker position, Denver ILB Danny Treveathan is a name I have read mentioned that the Dolphins would be interested in, and Simon Clancy mentioned Arizona OLB Sean Weatherspoon and Detroit OLB Tahir Whitehead along with another Bengal, LB Vincent Rey as possible considerations for the Dolphins.  I mentioned ILB James Laurinaitis earlier, and will bring him up again.  Don't know if the Dolphins will have interest, but he has been a solid player for a long time.  This is another position where the Dolphins have been reported to look to sign at least two players, which leads me to believe that LB Koa Misi time with the Dolphins is coming to an end along with LB Kelvin Sheppard.  This is a position for the Dolphins which has not performed well to say the least, so an upgrade for this group is essential.

On Twitter, Simon Clancy bought up a thought that if the Dolphins were to look DL in free agency, they could look at Bengal free agent Brandon Thompson.  I remember Thompson from his days at Clemson, and the 26 year old DT is very stout against the run.  Also, I read last night on Twitter from Armando Salguero of the Miami Herald that the Atlanta Falcons will be cutting former Miami Dolphin DT Paul Soliai, as he has refused to take a pay cut.  Soliai wants to look to return to Miami according to Salguero.  I tweeted Matthew Cannata of the FinsInsider about Soliai returning to Miami and if this could happen, and he said yes it could.  I would like to see Paul back in Miami on a team friendly deal.

Something to consider in regards to the Tight End position.  Jordan Cameron is coming off a 35-386-3 season for the Dolphins and has a 9.5 million salary cap number.  If he does not restructure his deal, I believe he will be cut.  He had his fair share of drops and just never seem to develop any type of chemistry with QB Ryan Tannehill.  Would like to have Cameron back, but not at that number.  A couple of names I would keep an eye on if the Dolphins were to cut Cameron loose is San Diego free agent Ladarius Green and Indianapolis free agent Dwayne Allen.

One last note on free agency is that Adam Beasley of the Miami Herald reported the development of Miami reaching out to WR Rishard Matthews to look to re-sign.  Matthews is coming of a solid season for Miami with 43-662-4 season.  To me, this would be a no brainer for the Dolphins, as Greg Jennings did not contribute a lot for this team and is making over 4 million/per season.  Cut Jennings and give Matthews that money on a 5 million/per year deal.  Right now I look at Matthews as a #3 receiver, as he has produced more that WR Kenny Stills.  In the multiple WR sets that Coach Gase will run, you need mulitple wide receivers.

How would all this effect the NFL Draft for Miami?  Both Simon Clancy and Matthew Cannata believe that if the Dolphins do go heavy CB and LB in free agency, it bring DL into the picture as a possible consideration as a 1st round pick.  Both myself and Mark Grimm, aka swerve believe that this is an exceptional deep class at DT, so I am not sure I agree with these two gentleman on that thought.  But it would certainly free up Miami to consider other needs if they were to be able to hit on those two areas of concern along with OG in free agency.

We got a long way to go and a lot of work to do.

I usually do my mocks with free agency in mind. This is not a good draft for guards so I am expecting them to finally sign a starter at guard. Other positions like corner, linebacker and defensive end can be filled through this draft. I'm also counting on Miller to be back. I'm not so sure Vernon comes back. So if we keep Wake and Shelby and add a guy like Ogbah we should be OK. Ogbah is being compared to Michael Bennett. Hargreaves is drawing comparisons to Joe Haden.