The pads are on & Training Camp has begun

As the beginning of the NFL season inches closer and closer. we are now in Training Camp and in PADS.  We now get the chance to take a look at the rookies and how they look as well as the new additions to the team this year.

It's also the time to establish who will be major contributors and who will not among the rookies, who will be starters and who will be part of the depth for the team among both rookies and the veterans on the team.    Key battles are now coming to a head at cornerback, linebacker and most importantly to the Dolphins, offensive guard.

I am going to start off discussing Miami's biggest acquisition during Free Agency, Ndamankung Suh.  We know what he is as a player, and he has not disappointed the first few days of camp.  He has been IMPOSSIBLE to block, from his power to his quickness to his mind, he has been everything the Dolphins thought he would be.  He has also done a great job of being a team leader and has taken 2nd round pick DT Jordan Phillips under his wing and 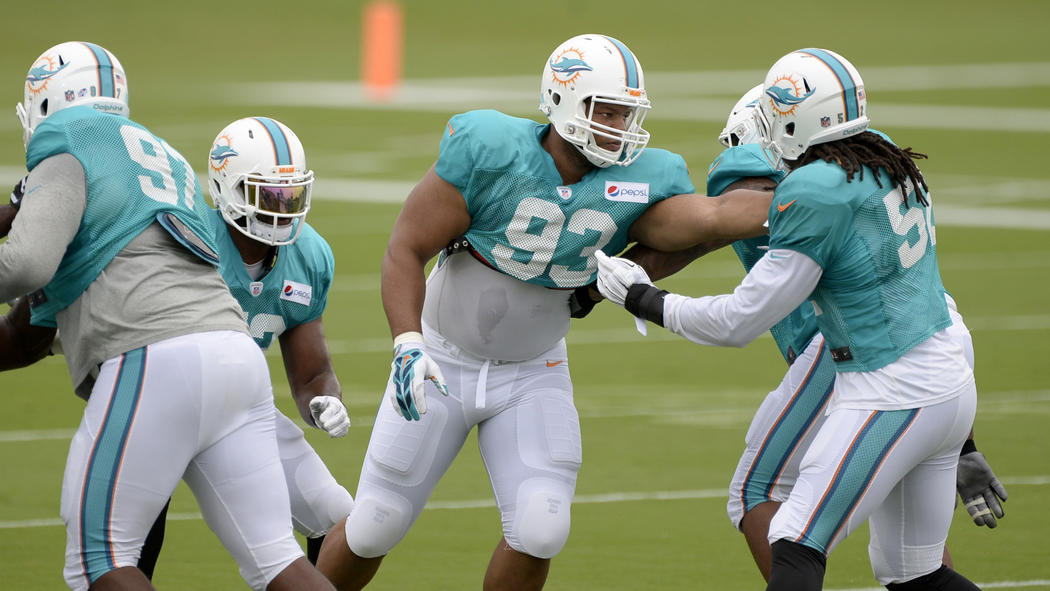 is mentoring the young man.  Right now, Phillips is running with the 2nd team defense and fellow DT Anthony Johnson.  I expect eventually that C.J Mosely will be running with Phillips on the 2nd group of defensive tackles.  The Dolphins are DEEP, Big, Young & Talented on the defensive line.  You win games in the trenches, and this defensive line for the Dolphins can and SHOULD be a dominant unit in 2015.

With that said, we move to the other side of the ball and the offensive line, and the biggest area of concern, the offensive guards.  Billy Turner had the difficult task of trying to deal with Suh, and he more than had his hands full.  Dallas Thomas, Sam Brenner, Jeff Linkenbach, Billy Turner and rookie Jamil Douglas are battling for the offensive guards spots.  And I have read that the rookie, Jamil Douglas has looked the best of the group.  Many have not given Douglas much of a chance, perhaps because he was a 4th round pick out of Arizona State, and probably for some, because they did not know a lot about him.  That said, he is a talented kid and can play, and is holding his own.

The Dolphins will need to determine how this group performs.  If they feel they don't have the answer in this group, they will need to make a move via free agency and possible OG Evan Mathis, or look to make a trade.  The Jets contacted Mathis recently, but backed off, as Mathis wants more money than they are willing to pay.  The next few weeks should determine what directions the Dolphins go.  I just read on Twitter from Omar Kelly that Joe Philbin stated that he was uncomfortable with the O-line pass protection during practice today.  Not a surprise when you consider the caliber of the Dolphins D-line and the fact that the Dolphins are trying to determine WHO will be the starting offensive guards.  There is NO CHEMISTRY with the OL, and there will not be until you have an established starting unit.

Just wanted to add this as well.  OLT Brandon Albert made his first apperance of the year in pads.  Good to have him back on the field, although I am sure it was just to get him use to being in pads and working on the knee to see how it feels, it a positive step.

Another key position battle is for the cornerback spot opposite Pro Bowl cornerback Brent Grimes.  The 2 key figures in this battle right now are Jamar Taylor and Brice McCain, signed from Pittsburgh during the off season.  It was thought that McCain would be the slot CB, and he still probably will see some time in the slot.  But he is be given an opportunity to man the CB spot opposite Grimes.  The key to me in this is can Taylor stay healthy?  If he can, he has the size, speed and tackling ability you want.  He is solid in coverage as well.  McCain is a good football player and will see the field.

The other key battle going into Training Camp is Linebackers.  The one player you know will be on the field is Jelani Jenkins, who has established himself

as a very solid, young linebacker for the Dolphins.  The other player that is close to being a lock is Koa Misi, but the question with Misi is whether he will be the MLB or the OLB.  Kelvin Sheppard has come in and performed well and is making a push for the starting MLB position.  He is a player that has shown leadership skills and the players gravitate to him.  The last player in this puzzle is UDFA from 2014, Chris McCain.  McCain has worked both at DE and at OLB, and has shown he can be a playmaker.  Has he learned the defense well enough and does he has the discipline needed.  DC Kevin Croyle has simplified the defense, which should help all the players, and we will see how this helps Chris.  The linebacker play HAS to improve for Miami.

In regards to the rookies, we know WR DeVante Parker will be out until close to the beginning of the season with the surgery on his foot.  Would have loved to had him on the field now, but I want him healthy when the season starts.  DT Jordan Phillips, CB's Bobby McCain & Tony Lippett & OG Jamil Douglas along with Jay Ajayi have chances to be contributors.  I think S Cedric Thompson will be a contributor on special teams, as the Dolphins have solid, young depth at the safety position.

Once again, I expect all of the 2015 draft picks to be on the 53 man roster.  I also expect to have some of the UDFA make the team as well.  We are just getting started.  Feels good to know Football is not far away.

Can September get here fast enough?

5 Keys to success this year

I think if you were to label coaches on the hotseat, Philbin’s name would have to be near the top. I’m not saying he has to win the superbowl to keep his job but I do think he needs to make the playoffs.  Even then, I think an early exodus without a good showing on the field may still be his undoing.  A lot of things have to go right. Miami has pretty good starting tackles on both sides of the ball but no depth. They have a thin, and average LB corps that can only be described as serviceable. They have a completely revamped WR corps and nothing will be known until they take snaps in September. Although I will go on record as saying the decision to trade Wallace was good for both parties involved.  Finally RT has to take this team on his shoulders. He’s been the best option Miami has had at QB since Dan the Man retired. He has shown remarkable growth and solid fundamentals. Miami needs him to take it one level higher and start winning games with his arm.