Don't Get Your Hopes on the Dolphins Signing G Evan Mathis.

SAY "NO" TO EVAN MATHIS

The Dolphins have done a poor job of drafting offensive linemen after the first round, so, we fans are desperate to get Dallas Thomas off the field. Let's not forget that last year's 3rd round pick, Billy Turner had a difficult transition in his rookie season and is projected as the guard on the other side of the line. The jury is out on Turner and there have been positive reports on him so far (remember the pads are still off), but we know what we have in Thomas and he is not starting material (or possibly even back up material).

Enter the fact that many fans wanted the Dolphins to trade for Eagles OG Evan Mathis, and that he just was released by Eagles. Why? He is 33 and wants a better contract. He's the 2nd rated guard in the NFL and he wants to be paid that way. He's caused a lot of friction at Philadelphia over it and the very impatient Chip Kelly had enough of him.

Why should we not go after him hard? Suh. Next year his salary is going to take a big chunk of our salary cap and that does not leave a lot of room for multi-year financial commitments. Evan Mathis is looking for a 3 year, $6-7 million contract and that my friend makes it not feasible to wreck our 2016 season. Unless we can sign anyone to a 1 year contract, we are financially unable to do this. We wanted Suh and that's the breaks of getting someone with his level of talent. We have to do a much better job of drafting offensive linemen after the first round.

Does Dallas Thomas Have Some Dirt on Philbin?

I've been beating my head against the wall trying to figure out why the Dolphins give OG Dallas Thomas so many opportunities to start for the Dolphins. I understand that we have little depth at the position, but It has to be that he works hard trying to succeed. Heck, I'd work hard, too, but you don't want me to protect Tannehill.

Barry Jackson posted this during the first week of OTAs:

Lazor on Dallas Thomas, who has been getting first-team reps at left guard: “I saw improvement as the season went on from the preseason through the season and I expect nothing less because Dallas has been busting his butt. I think everyone is going to be happy with the direction he’s going. Certainly we’re all rooting for him.”

Any Tannehill haters that are still gnashing their teeth over the Dolphins signing Ryan Tannehill to that long term contract extension should take a look at what the Panthers just paid Cam Newton.  I'll let Peter King give his thoughts on it here ....

I think you also can’t blame the Panthers for overpaying for Newton. What choice did they have? Quarterbacks are rare in the NFL, even average ones. A team that’s been to the playoffs two straight years can’t plan to let its mid-20-year-old signal-caller leave soon via free agency. The only way to prevent that is to make him one of the five highest-paid quarterbacks in the game. That’s simply what an adequate NFL quarterback costs. Newton’s contract is not a testament to Newton—it’s a testament to the price of his position. It was the same with Ryan Tannehill, who got a new deal shortly before Newton did. (And by the way, Tannehill, who has improved each year in his career, is a much better player and long-term prospect than his Carolina counterpart).

What? What?? While I will agree with some of the "haters" in that Tannehill has not willed his teams to victories late in the season as Andrew Luck does, I will also point out that the offensive line has been terrible for Tannehill. He is mentally tough and has a nice short to medium pass, but the only deep passes that he has been able to throw consistently have been to anyone but our deep threat. Keep in mind that Tannehill's contract was a very smart "prove me" contract that he was willing to sign. He wants to be great and he puts the hard work to get in to get it done. We are all hoping that he takes the next step in his development. Unfortunately I expect another "hurried" season from Tannehill as the offensive line still needs a lot of work at the guard positions.

The contract that Tanne signed is an ultimatum contract, he's got 2 years to prove he's worth the big money, it's the most team friendly QB contract your ever going to see, and the Fins have clearly drawn a line in the sand, the 5th league day of 2017, that's the day that 17,5 mil of the 45 mil in guaranteed money kicks in.

While I do not believe the Dolphins drew any line in the sand, I expect Tannehill to more than show that he is a franchise quarterback. The next Dan Marino? Don't be ridiculous. Guys like Dan the Man only come along once in a lifetime. That is why Danny is in the HOF.

The former teammates and best of friends square off on December 14th. Alex Marvez had this to say ...

“I talked to Jarvis Landry about this. He said that before the Dolphins play the Giants on Monday Night Football in December that he and Odell Beckham are putting on some type of receiving show during pregame warm ups. Each will try to one-up the other. They’ve been talking about trying to do something really special, really cool, without hurting themselves obviously,” Marvez said.

After being drafted last year, Landry told reporters that he is the "reliable one".  Jarvis Landry is off to show people that he isn't just a slot receiver, but can line up on the outside. The good thing is that this allows Greg Jennings to take the slot at times, and this makes the passing offense even more dangerous if Landry can pull this off. All reports on Landry are that he is impressing in camp making one-handed catches, and looking very good in Red Zone drills.

On a side note, WR Rishard Matthews has stepped up during DeVante Parker's absense. "He was all over the field and made several nice grabs, certainly taking advantage of the extra reps.  Matthews asked to be traded earlier this year after the Dolphins added several new receivers but he has been in attendance for all the voluntary workouts open to the media and is proving his worth each and every day."

On Friday of this week, Miami 1st round pick DeVante Parker went in to have surgery on the foot that caused him to miss the first 7 games of his last season with Louisville.  It had been stated that if this was the regular season, DeVante could play, but because of the time of year and wanting to get this addressed NOW so he can be healthy for the season, the procedure was done NOW.

Here is a quote from the piece Omar Kelly of the Sun-Sentinel wrote on the Parker surgery.

"The source said this surgery went well and that Parker should be ready in time to play in the Sept. 13 season opener at Washington. What isn’t known yet is how much of training camp Parker might miss, and whether that will be a setback to his early development.

At some point recently, Parker “landed and felt some pain” in the foot, the source said. The Dolphins had a choice between putting Parker’s foot in a boot or doing the surgery, and the latter was elected because all parties wanted to take care of the problem now, while the calendar works in their favor."

You hate to see this happen at this point, as Parker and QB Ryan Tannehill had been working together a good bit and were starting to form a nice chemistry, something that never seem to be the case with one Mike Wallace.  Tannehill had spoken glowing of Parker, as this quote from Kelly's piece indicates.

“DeVante was great today,” Tannehill said. “You've been seeing it the past few weeks, just working on air. But today you got to see him make some tough catches with defenders on his back, in traffic, and that's what you want to see, that a guy with a big body is able 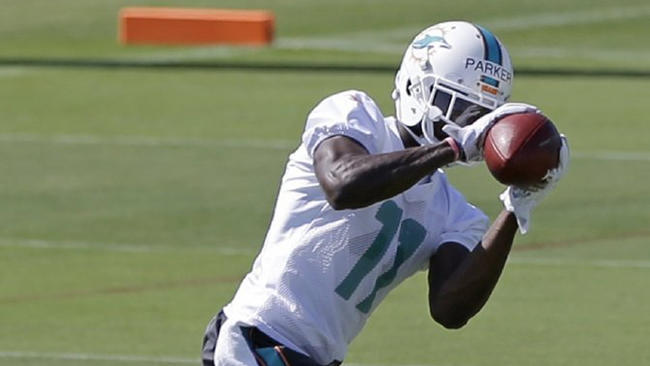 to make strong catches with his hands in traffic.”

Is there reason for concern among Dolphin fans, sure there is.  You hope that as it is being reported, and I believe as well that this was done to address the problem NOW in regards to replacing the screw put in place during the original surgery, a maintenance issue.  The fact that he could play if this was during the regular season is encouraging, but we have seen foot injuries end careers also.  Miami's own O.J McDuffie had his career short circuited due to a foot injury and Deion Sanders career ended due to Turf Toe.  That said, this is a quote from Miami Herald writer Armando Salguero in regards to Jelani Jenkins having a similar injury.

"Parker's injury is similar to the injury linebacker Jelani Jenkins had last year, per a source. Jenkins missed one game as a result."

As Dolphins fans, you hope this is very much the case.  DeVante Parker is exactly what the Dolphins have been looking for the last few years at wide receiver, a big body that can be a Red Zone threat, but also is capable of being dangerous after the catch.  Parker can be that type of player for Miami.  First things first, he has to be healthy first and foremost.