Thoughts/Observations on the Miami 2014 NFL Draft

We are now over a week plus removed from the 2014 NFL Draft, and one thing that caught my attention was the talk that Miami took too many FCS players and not enough FBS players.  Miami drafted OLT/OG Billy Turner of North Dakota State in the 3rd round,  CB/S Walt Aikens of Liberty in the 4th round, ILB Jordan Tripp of Montana with their 2nd 5th round pick, WR Matt Hazel of Coastal Carolina in the 6th round and DE Terrance Fede from Marist with their 7th round pick.  Miami took ORT Ju'Wuan James of Tennessee in the 1st round, WR Jarvis Landry of LSU in the 2nd round and Georgia TE Arthur Lynch in the 5th round.

I can only speak for myself, but this does not bother me that much.  A lot of good football players slip past the FBS level to the FCS level, and a lot of 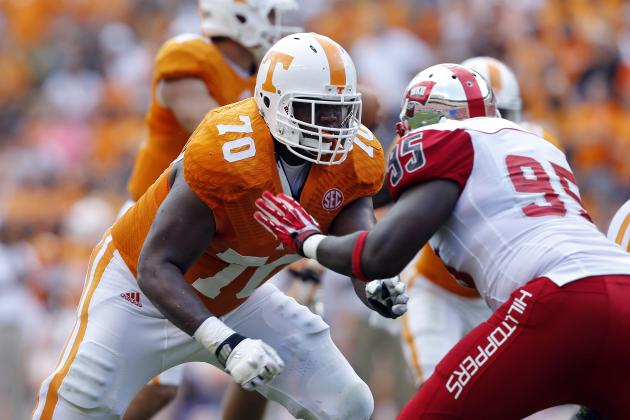 these players come into the NFL and become major contributors.  Are their concerns about the level of competition that these kids have played against, sure, to some degree.  That said, plenty of kids from the MAJOR programs come in and are bust and struggle with the level of play at the NFL level.

My thoughts on the draft is that I believe the Dolphins had a solid draft and addressed the needs that they need to address.  The offensive line was a major concern, and while the Dolphins addressed it to a large degree with free agency, they still needed to add an ORT and an OG.  Miami drafted the best PURE ORT in the draft in Tennessee ORT Ju'Wuan James.  This move was questioned mostly for the fact that the so called experts thought the Dolphins reached.  By the time we got to the draft, I was seeing James in the 1st round of more and more mock drafts, and was projected to be a 1st-2nd round pick.  Would I have liked to seen Miami possibly trade down and get an additional pick, sure.  But the Dolphins must have felt like if they would have traded down, they might have missed out on James.  Seattle follows this philosphy as well, and it worked well for them.  With their 3rd round pick, the Dolphins took big, physical Billy Turner, the OLT/OG from North Dakota State.  Turner will be moved to OG, and could man either the ORG or OLG spot.  These two young kids will be given every chance to win the starting positions, and to be frank, I expect both of them to start.

With the injuries to wide receivers Brandon Gibson and Brian Hartline, Miami needed to bring in a wide receiver, and the Dolphins draft WR Jarvis Landry 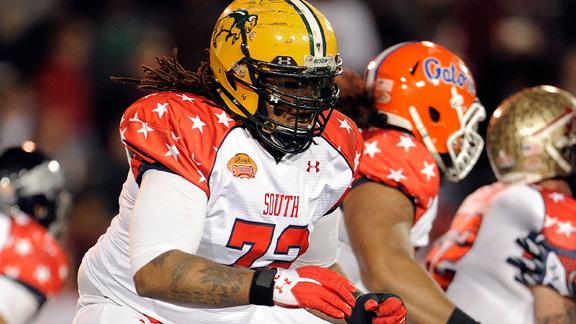 in the 2nd round.  I consider Landry to be a poor man version of Anquan Boldin, as he is not a burner, but has great hands, is tough, very productive coming out of college and a willing down field run blocker.  Tight End was a position that most would have liked another seam type of threat, like Charles Clay.  The Dolphins took TE Arthur Lynch of Georgis, who is an intermediate route runner that has some run skills after the catch.  Very good inline blocker, and an immediate threat to 2011 3rd round disappointment Michael Egnew.

ILB was a position the Dolphins looked to address in free agency, and there is still talk about moving Koa Misi inside.  Miami drafted ILB Jordan Tripp from Montana in the 5th round.  Tripp is football savvy, aggressive and plays downhill.  He has nice size at 6'3, 234 lbs and had the quickest 3-cone drill and 20 yard shuttle among the linebackers.  He ran a 4.69 40 and is a weight room junkie.  Can he translate this into being a factor and contributor on the defense, time will tell.  At worst, he will be a special teams contributor.

Once the draft ended, the next phase of acquiring talent began with the signing of undrafted free agents, and I thought the Dolphins did a nice job of signing some nice players here as well.  Some names that caught my attention was DT Anthony Johnson of LSU,  RB Damien Williams of Oklahoma, Arkansas OT David Hurd, Utah State OC Tyler Larsen and Marshall TE/HB Gator Hoskins.

How will this draft class pan out for the Dolphins, time will tell.  I gave the Dolphins a B for the 2013 draft class, but that class struggled mightly in 2013.  I don't think we will know how these draft classes will pan out until a few years after the fact.  Case and point, 2011 6th round draft choice Charles Clay.  I liked Clay coming out of Tulsa, but he did not come into his own as a major contributor for the Dolphins until this past year.  The Dolphins do really need Ju'Wuan James and Billy Turner to be major contributors early for the Dolphins.  This could be the difference between the Dolphins being a playoff team or once again on the outside looking in.

Miami not even close to one of the worst drafts

Everyone keeps complaining about all the small school players we took. But you know what? I've actually heard about these players and seen them ranked by everyone which is why I like our draft and think it's one of the better ones I saw this weekend. Do you realize how many teams drafted players in the top 5 rounds that I never even heard of? Now that's bad drafting or reaching(whatever you want to call it). Taking small school players is not bad drafting.

Miami got 2 of the top 10 offensive linemen. Pretty smart move considering it was our weakest part of the team. They got one of the most clutch receivers in this draft and an eventual starter.

In the 4th round they got a mammoth corner to add to an already talented secondary.

In the 5th round they got the 6th best tight end on some websites boards. Not sure how anyone can complain about that. And the other 5th round pick is an Uber-versatile linebacker that draft analysts were raving about leading up to the draft.

Can't say I know much about the receiver Hazel but he looked pretty impressive in those highlights.

Terence Fede was on lists of the top small school players.

So I am very satisfied with how Hickey did in his first draft in Miami.

The teams that should be complaining are as follows.

Cleveland Browns:
Your team enters this draft with a mountain of picks. Your superstar receiver is busted on his 3rd drug offense. You're sitting in the Sammy Watkins draft slot and you trade out of it???? What? and for Justin Gilbert? Oh and then you go 7 rounds without drafting a wide receiver? WHAT???? EPIC FAIL
So who will Johnny Football be throwing to opening day? Greg Little and Travis Benjamin? LOL

Dallas Cowboys:
Your defense got completely picked apart in the offseason you need 3 starters in the front 7 and you draft Zack Martin? Here's one of those teams that took a guy I never saw on any ranking list in the 4th round. They also did that last year.

Carolina Panthers:
You lost your top 3 receivers and 3 offensive linemen retired in one offseason. Yet you draft 1 receiver and 1 lineman? What?????

Detroit Lions:
You have one of the shakiest secondaries in the league and you draft one defensive back in round 4?

Kansas City Chiefs:
Your biggest need by a mile is wide receiver and you drafted how many of them? ZERO!

New England Patriots:
Did you really just draft a guy in round 1 with 2 major knee injuries already? LOL

How dare anyone make fun of Miami's draft. Where they got value and actually filled their needs.

Dolphins take Marist DE Terrence Fede in the 7th Round sacks in 2013, and finished his career with 30.5 sacks.  Concerns are about his level of competition and he may have to make the conversion to an OLB in a 3-4 scheme, something Miami uses on occassions.  Has initial quickness to beat college OT, but needs to develop more pass rush moves, as his quickness will be handled by NFL tackles as his quickness is his calling card.